Arctic Methane Will End Us 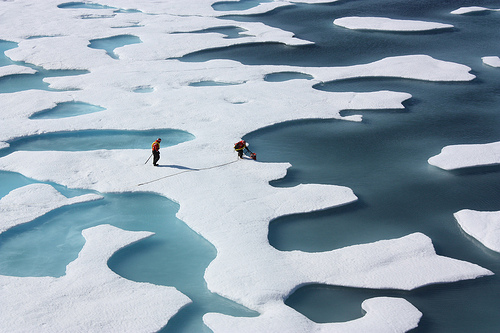 While we use political ideology as weaponry on the global warming battlefield, climate scientist are getting profound about the increasing dangers our ignorant inaction continues to expedient.

“If even a small fraction of Arctic sea floor carbon is released to the atmosphere, we’re f’d. Methane is more than 20 times more potent than CO2 [carbon dioxide] in trapping infrared as part of the natural greenhouse effect. Methane getting to the surface—that’s potent stuff.

“We’re on a trajectory to an unmanageable heating scenario, and we need to get off it. We’re f**ked at a certain point, right? It just becomes unmanageable. The climate dragon is being poked, and eventually the dragon becomes pissed off enough to trash the place.”

So yeah, let’s keep listening to guys/gals running for political office with the vested interest of large and small corporations behind them. Let’s continue the “f&^k yeah!” rally while driving down an interstate listening to a guy/gal with a talk show job, and a vested interest in paying his/her bills. Because the planet is all about politics. Animals, plant life, air, etc., Conservative or Liberal ideology, that’s what really matters to all these things. The sea floor and greenhouse gas really gives a damn if you have a job or not.