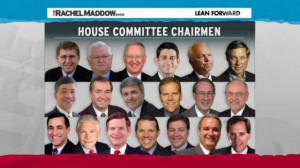 One would have a hard time arguing the Republican party’s love of older White men. I’m sure there is a word or acronym for this sort of fetish in the gay community, or at least I hope there is.

After the crushing defeat on November 6th, the Republican party was handed a tally sheet that highlighted a 12% deficit among female voters. This is not a fluke, this is a trend. Women are running away from the party in packs, packs that include all sorts of other American able bodied voters that look nothing like the guys pictured above.

However, after giving the tally sheet a once over, what did the party do to make inroads to fix this growing lethal trend? It hired a bunch of old White men to fill it’s cabinet positions.

Now that’s change you can believe in!

Visit NBCNews.com for breaking news, world news, and news about the economy