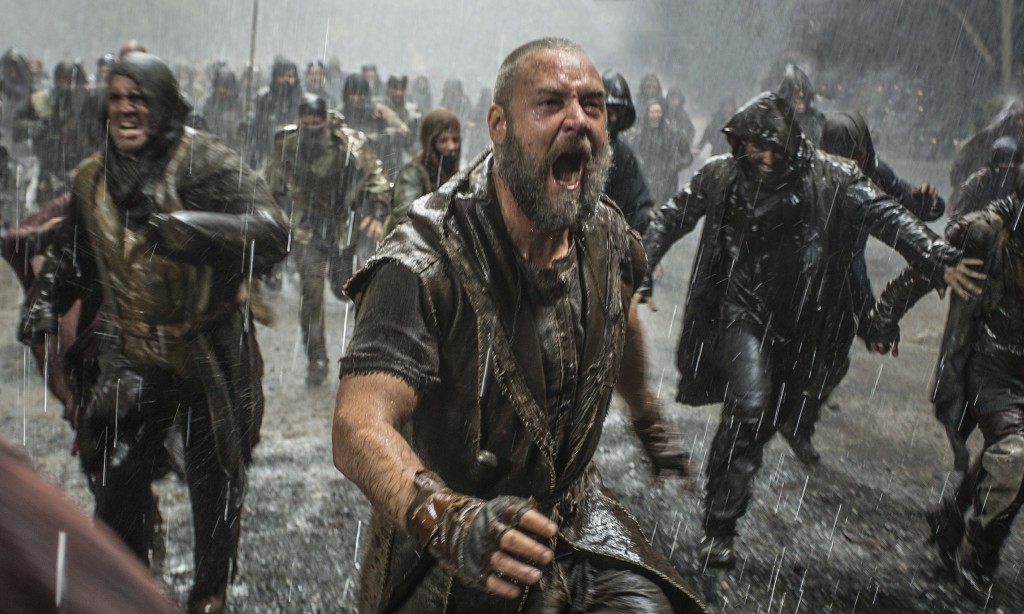 More and more, my film going experience is keeping me at home and locked onto the HGTV channel. Shelling out $10 and up for a single ticket times two, then $8 for popcorn and $6 or more for a drink, is rapidly becoming a no-can-do. Sure, the money factors in greatly; but it’s the quality that is the real issue here.

I’m a film buff. I love movies, the art of storytelling through the visual arts is one of humanities greatest achievements. It has had it’s ups and downs, but I fear it has finally flatlined.

This brings me to Noah. Had I actually drained the bank account to see this pile in a theatre,.. Well… something. I should have learned my lesson after shelling out hard earned cash to see ‘Pacific Rim’, a travesty that left me filled with anger in the theater lobby.  Noah, well Noah simply left me perplexed on the sofa. What in the hell did I just watch? Badass ‘Leroy ‘Noah’ Brown’ kicking, ass and taking no survivors. He’s wearing boots, jeans and a finely tailored overcoat. Sure, his attire is a tad on the rough for wear apocalyptic side, but it’s a fashionable rough for wear apocalyptic side. One befitting a kill ’em quick, quietly and without remorse servant of God, or as the film calls him “Creator”. (BTW, pictured above, we can see another glaring example of how modern day rappers stole from all things oldskool. Witness early man, first to rock the hoodie under the overcoat).

Noah’s weapons choice? A serious Bowie Knife that looks as though it had been purchased at Big5 a few years before we catch up with the adult Noah. Does Noah have any buddies? Of course he does! Just like in the Bible, Noah befriends a group of talking rock lobsters God banished to the molten planet and named “the Watchers”. After creating all that there is, God was understandably fatigued the day he decided to title his punished angels. Let’s see… Umm, awe screw it I’ll name you later.  You guys, watch out for mean men with axes. Wait! That’s it! From this day on, I shall call you Watchers… Now go.

For thousands of years they watched evolution take place in the six days it took God to create the world. Then, these beings from space heaven, banished to earth, thrown into molten lava and doomed to crab walk the earth with a boring name, began to be killed off by humans with man-made rock weapons. Rocks can kill rock angels you ask? Well sure. A man wielding a steel sword, bowie knife or pry-bar, simply has to get in and peel away the tons of molten lava encasing a Watcher, thereby exposing the glowing spirit within, sending the angel back to heaven… The place God banished them from… One final thrust of forged steel weaponry will undo what God has purposely done. Silly God, he just never seemed to get it. Man can and will always undo that which he has done.

But wait, you said rock weapons. As far as we know, the earliest forged metal weaponry was made with copper, and that wasn’t discovered and used until the early Mesopotamian and Egyptian civilization. Wasn’t that long after Noah?

Yes… Yes. But people, we’re talking about badass ‘Leroy ‘Noah’ Brown’, the baddest man in the whole damn town. He’s got magic, crazy dreams and an old British grandfather with even more hella magic. Oh and dare I forget Noah’s arch enemy super-villain, Tubal-cain; famous for saying “I should have killed you when I had the chance”. Even though prior to this grand statement, Tubal-cain had no idea Noah existed. Understand, the name Tubal-cain has been translated to mean ‘smith’, and  he is believed to be the inventor of forging. He was also said to be the physically strongest and most successful alchemist of his time; a time that cannot be paralleled with Noah’s day biblically. But, what better person to match wits and strengths with badass ‘Leroy ‘Noah’ Brown’, days before the planet became a giant orbiting snow globe capable of filling up with water. (ok, that last line was a jab at the actual biblical story, not Aronofsky’s ridiculous re-telling of a fantastical story that mentions close to nothing introduced in the film).

Ok, I can go on and on, I truly can. I am not a bible thumper, but I know the bible. I consider myself to be an agnostic-atheist believing in a power greater than myself, that is quite possibly, myself. Likened to the universe, my beliefs are a conundrum even to me. But my beliefs and sometimes lack thereof, don’t keep me from marveling in the stories portrayed in the bible. The right backdrop, sweeping orchestral movements and great acting, can take a bible story that is only four chapters long, and turn it into a beautiful visual portrayal of a fascinating period of debated history. Turning Noah (who is biblically stated to be around 600 years old at the time of the flood) into a brooding badass killing machine – fighting alongside rock lobster angels who are helping to build an Ark because of a few Stanley Kubrick dreams he’s had. Putting Noah and everyone around him in Mad Max attire and giving mortal men god-like magical powers (none of which are ever mentioned in any Judeo-Christian text) steals the ‘magic’ away from the time period, believed or not believed. It takes Lawrence out of the Arabia and gives Achilles a gun. This is a time of human-kind’s most simplistic, bare and oddly romantic intransigence with all things heaven and earth. To do what Aronofsky has done with this story, robs an increasingly optically educated society of the chance to visually bare witness to the underlining message being delivered through personal faith(conviction), family, caring for and cleansing in a world doomed to be filled with “sin”.  Noah’s story.

Noah is now the classic example, and will one day be used as an example of the death of cinema.

Thank God for Netflix and HBO!