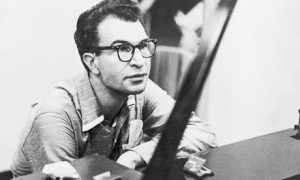 A few lifetimes ago, back when I was teenager into Punk and anything else subversive, brand new and counter culture, I landed a part-time job in a department store as teenagers often do. To this day that (Mc)job remains one of the more fonder experiences in my life. A bunch of kids playing grown-up, wearing suits and getting paid to misbehave on the catacomb product aligned maze floor of suburban department store.

Yet, while sporting a mohawk (a real one, not this pulling hair straight up with hair gell crap) eye make-up and a omnipresent underlined contempt for all things contemptible, my teenaged beast, bound for six hours four times a week by a cheap Kmart suit and tie, was soothed, tamed and shown another way three/four times each work day by a song on that infernal department store musac constantly pumping from the ceiling.

Later, as my music appreciation grew and expanded with my ability to play it, I found out that the piece of music that transported me serenely, solemnly as a teen, was written and performed by Dave Brubeck.

This is how art and artist transform us and guide us as a society without us even knowing, or understanding that it is happening. This is how angst turns to curiosity which leads to understanding. That one song on a otherwise refiled looped musac tape, led me to seek Jazz out, learn and admire it’s artist and artistry and relate to its contempt of the contemptible. This one song broadened my horizon by inviting me to discover a world filled harmonic tones and colors. Well dressed neatly coifed characters penetrating society with a counter culture that was uniquely American yet universally human.

Out of all the giants of Jazz. Out of all the timeless legendary pieces written and preformed by celebrated long gone legends, it was Dave Brubeck and his song “Take Five” that stamped my passport for entry to this brave new world.

Dave Brubeck has passed today, he was 91-years old, and yet will live forever.